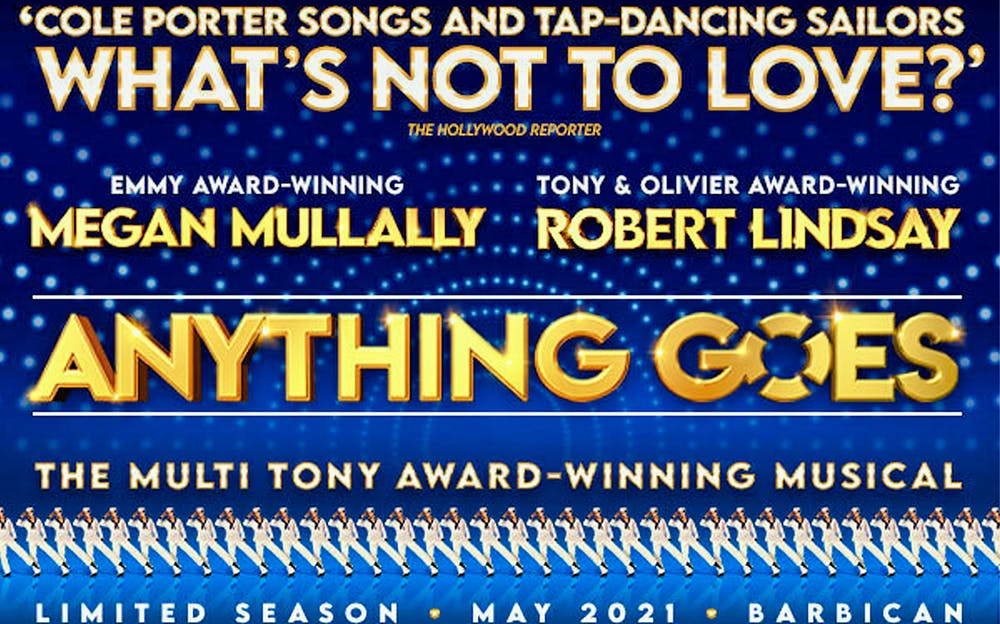 Anything Goes Tickets On Sale Now!

Anything Goes is undoubtedly one of the top evergreen musical comedies to ever grace the stage. Its timeless melodies and witty storyline have been thrilling audiences worldwide since 1934, when it premiered on Broadway. A year later, the musical took the UK audiences on a musical journey in London’s West End. In 2021, the show returns to the Barbican with spectacular production and award-winning actors Robert Lindsay, Sutton Foster, Gary Wilmot and Felicity Kendal. Packed with brilliant rhymes, tap dancing and slapstick humour, it is bound to have you in stitches.

Anything Goes stars multiple award-winner Robert Lindsay, best known for his work in My Family, who plays Moonface Martin. Alongside him is Sutton Foster, who reprises her Tony-winning performance of Reno Sweeney.

Enjoy the show, featuring classic musical hits ‘You’re The Top’, ‘I Get A Kick Out Of You’, ‘You’d Be So Easy To Love’, ‘It’s De-Lovely’, ‘Let’s Misbehave’, and ‘All Through The Night’. Anything Goes features lyrics and music by Cole Porter. The musical’s previous successes make it one of the most anticipated stage productions in 2021. So, what are you waiting for? Get your Anything Goes tickets today to book the best seats in the house. Rest assured, you are in for a treat!

Anything Goes When it Comes to the Girl of Your Dreams

What happens when you put a cast of comically colourful characters on a ship? You guessed it: mayhem ensues! Aboard the S.S. American, travelling to England from New York, are passengers Reno Sweeney, Billy Crocker and Moonface Martin, AKA Public Enemy #13. Reno is a nightclub singer and evangelist, accompanied by Billy Crocker, a lovestruck Wall Street broker who fell in love with a pretty girl he met in a taxi. When Billy discovers that she is boarding the S.S. American to London, he sneaks aboard to try to win her heart. However, the girl he is pursuing is engaged to a British aristocrat named Sir Evelyn Oakleigh, but Billy won’t back down. Watch Reno and Moonface try to help Billy win the girl of his dreams as chaos ensues. But will they succeed?

Enjoy a fantastic evening of dancing, singing, blackmail, intricate disguises, and comedy hijinks with Anything Goes tickets, on sale now!