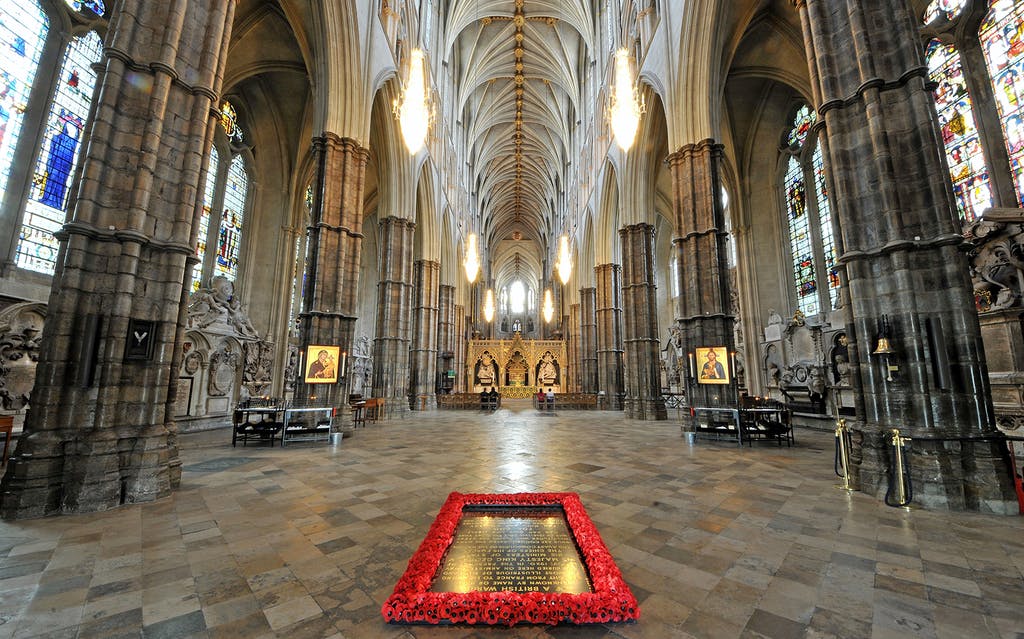 Since the coronation of William the Conqueror in 1066, every British monarch has been crowned here, excluding Edward V and Edward VIII. Westminster Abbey also has a history of royal weddings. The first was of Henry I and Matilda of Scotland in 1100. Sixteen royal weddings have taken place here ever since. Richard II was the only other reigning sovereign who married in the Abbey. In 2011, Prince William and Catherine Middleton married here.

A story of monks and monarchs

Westminster Abbey is the resting place of over 3,000 great Britons, including seventeen sovereigns, eight Prime Ministers, scientists, actors, military leaders and poet laureates. Sir Isaac Newton, Ernest Rutherford and David Livingstone are a few of the prominent names whose tombs are in the Abbey. George II, who ruled from 1683 to 1760, was the last monarch to be buried in the Abbey.

A section of the south transept, also known as Poet’s Corner, is a must-see for literature students. It is the resting place of some of English literature’s most prominent names like Robert Browning, Ben Jonson, John Dryden and Geoffrey Chaucer are buried here. Near the west door in the centre of the nave is the grave of the Unknown Warrior whose remains were brought from Belgium in 1920.

A journey back in time

Benedictine monks founded this inspiring historical place. The unique architecture of Westminster Abbey itself takes you back in time. Henry III took down the old church to replace it with the existing Westminster Abbey in 1245. The modern French cathedral architecture of that time heavily influenced the Church’s pointy Gothic style and overall design. The Abbey underwent restoration after damage caused by bombing during World War II.

There is much to see in Westminster Abbey. The Pyx Chamber, built in 1070, is one of the oldest parts of Westminster Abbey. Its spectacular fan-vaulted ceiling and the overall construction of the Henry VII Lady Chapel greatly inspire visitors. Some of the Chamber’s original tiles and medieval tiled floor still exist. The Coronation Chair built for King Edward I in 1296 is available for public display. The Chair has been the crowning seat of every monarch henceforth. England’s oldest altarpiece, the Westminster Retable, is also on display at the Abbey’s Queen’s Diamond Jubilee Galleries. The Quire – home to music every day for over 1,000 years – is another impressive attraction. Attend a daily choral service to listen to the mesmerising Choir singing from the stalls.

Recommended 15+ yearsChildren under 15 must be accompanied by an adult

Check out our in-depth frequently asked questions pages for everything related to Westminster Abbey Tickets: